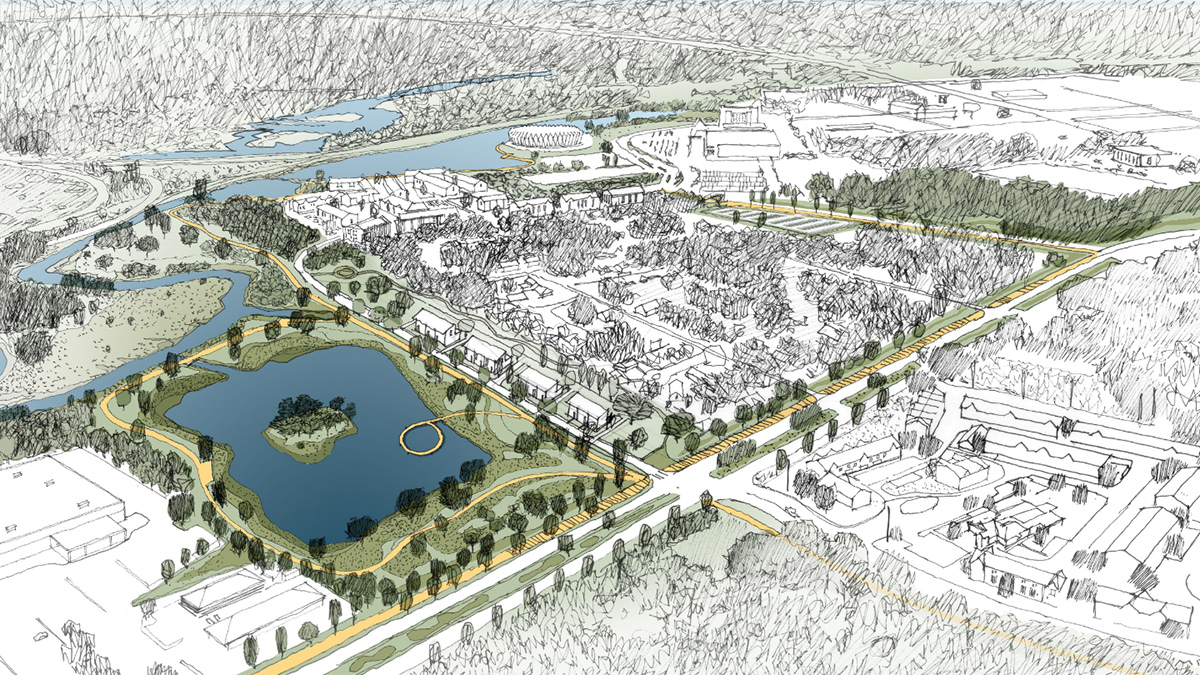 Photo courtesy of Waggonner&Ball. Newmarket Creek runs through much of Hampton's core. The city seeks to reduce flooding around the watershed.

The city of Hampton will borrow $12 million from private investors to help fund efforts to reduce flooding and water pollution.

The new money will help pay for three nature-based infrastructure projects meant to control water flow in the creek and keep areas around the watershed dry.

The funding mechanism — known as an environmental impact bond — has become increasingly popular as municipalities search for ways to finance large-scale, expensive resilience projects in response to climate change and pollution problems.

Two other cities, Washington D.C and Atlanta, are employing the bonds. Hampton is the first locality in Virginia to use one.

“This environmental impact bond demonstrates our commitment to seek out innovation in financing as well as innovation in implementing projects that will make our city move livable and beautiful while reducing flooding and pollution,” Hampton Mayor Donnie Tuck said during a Thursday news briefing.

The bond is part of Hampton’s overall plan, called Resilient Hampton, to deal with climate change and recurring flooding. Altogether, the three new projects are expected to add more than 8.6 million gallons of storage capacity for stormwater that would otherwise contribute to flooding and polluted runoff in the Newmarket Creek watershed.

During heavy rainstorms, water in the creek tends to pile up in downstream parts of the waterway before overflowing its banks. One of the new projects, named Big Bethel Blueway, involves installing wetlands and dams around the watershed to better contain floodwater and channel it away from flood-prone areas.

The environmental impact bond will also help Hampton pay to elevate a part of North Armistead Avenue that often floods. The city will surround the roadway with plants that will help capture stormwater and prevent it from running off onto the street.

The final project involves deepening Lake Hampton so that it can hold more water. The city will also add wetlands around it to help filter and absorb stormwater.

“We’re really trying to start in the upper parts of the watershed and start slowing water where it falls,” said David Imburgia, Hampton’s chief resilience officer. He noted the goal is to reduce how much water “is ending up downstream in the neighborhoods that are traditionally flooded.”

Construction on the projects is expected to begin in Fall 2021 and take two to three years to complete.

In addition to mitigating flooding and water pollution in Newmarket Creek, officials said Hampton’s plans could help with Virginia’s ongoing restoration of the Chesapeake Bay.

Newmarket Creek connects with the Back River, which flows into the bay. By limiting polluted runoff into the creek, the project will help improve water quality in the bay.

The non-profit Chesapeake Bay Foundation helped design Hampton’s three projects as well as the framework and reporting requirements of the bond.

Lee Epstein, a program director with CBF, said the foundation offered to help localities across Virginia, Maryland and Pennsylvania receive an environmental impact bond. Hampton was the only municipality in Virginia that showed interest.

“Hampton Roads is facing so many compounding factors that are complicating our flooding,” Everett said. “We’ve got to develop these innovative solutions. The more tools in the toolbox, the better.”