It's hard to believe that the hole President Trump dug for himself could get deeper, but it has.

A record and widening majority of Americans disapprove of the job he's doing when it comes to handling the coronavirus pandemic; he gets poor scores on race relations; he's seen a suburban erosion despite efforts to win over suburban voters with fear; and all that has led to a worsened outlook for Trump against Democrat Joe Biden in the presidential election.

As a result, in the past month and a half, the latest NPR analysis of the Electoral College has several states shifting in Biden's favor, and now has a 297-170 advantage over Trump with exactly three months to go until Election Day.

Here are our changes:

(Read more about our methodology and see the previous map here.)

If all of the states leaning in Biden's direction currently wind up going his way this fall, he would secure more than enough electoral votes to win the presidency.

With Trump at what seems to be his lowest point politically, it would make sense that, if the election were held today, Biden would have the advantage, but Biden's advantage in November may not be as solid as the total electoral votes show in this map.

Consider, for example, if Biden were to lose Florida, his total would drop to 268 votes, two short of the majority needed.

The Trump campaign believes its strength is being understated in polls, and polls have shown that, even in places Biden is ahead, voters think Trump will do better than surveys currently show. 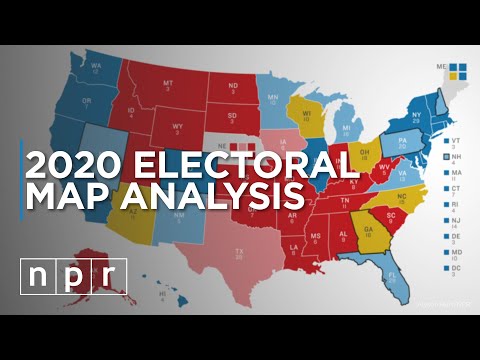 The Biden campaign also expects the race to tighten, especially if Trump is seen to be doing even marginally better in handling the coronavirus as the fall approaches.

But right now, in order for the president to win reelection, he is going to have to win all of the current toss ups and make inroads in places that are leaning Biden's direction. That's not unheard of. Trump did the same thing in 2016.

Why we made these moves:

Colorado (9 electoral votes, Lean D to Likely D): This state has moved more sharply in Biden's direction as the coronavirus has become full blown nationally. Biden's polling advantage has increased 12 percentage points, giving him an average lead of 53% to 39%.

Florida (29, Toss Up to Lean D): This was the biggest and most difficult move to make given Florida's history of being one of the closest states in recent presidential elections, as well as going against the Democratic wave in 2018 by electing a Republican governor and senator. But it's just hard to ignore that Biden has gone from a 49% to 48% polling advantage in early February to 50% to 44%, with some reputable surveys showing Biden with a double-digit lead. This is one state we expect to snap back to toss up, but right now it's leaning in Biden's direction.

New Hampshire (4, Toss Up to Lean D): Even though this was the closest state in 2016 by raw votes, Hillary Clinton won it. Democrats have had success here up and down the ballot, and Biden now leads the state by 10 points on average. There hasn't been much polling in New Hampshire, so we will continue to watch if it tightens, but the best example of movement came from the University of New Hampshire poll. In May, Biden was up narrowly, 46% to 44%. In mid-July, his lead ballooned to 53% to 40%.

Nevada (6, Toss Up to Lean D): While Nevada was close in 2016, Biden's advantage has remained steady, Democrats have had a lot of success there in recent elections, and they have a battle-tested ground game.

Pennsylvania (20, Toss Up to Lean D): It's a similar story to Florida in terms of polling. Biden had a narrow 48% to 45% lead in an average of the polls at the end of February. Now, Biden is ahead 50% to 43%. Being at 50% in so many places is significant. This also had been a traditionally Democratic state, Biden's campaign is headquartered there, and he's been campaigning there in person. Again, this is one that could move back to toss up, but for now, it's leaning towards the Democratic candidate.

Georgia (16, Lean R to Toss Up): If you had to bet, this one probably still tips in Trump's direction on Election Day, but for months the polls have been tight, tight, tight. Republicans have continued to win statewide office after statewide office, but the demographic trends continue to move in Democrats' favor.

Other states and factors to watch:

North Carolina: It also remains in the toss up category. Biden has a narrow polling advantage, but an NBC/Marist poll raised eyebrows last week when it showed Biden with a 7-point lead and over the 50% threshold: 51% to 44%. We'll watch if that's the beginning of a trend or an outlier.

Ohio: There's an argument for putting Ohio in the toss up category, strictly based on the closeness of polling. But this is a state Trump should win based on demographic and voting trends. If Ohio is really close on election night, it likely means a sizable Biden victory overall. The Biden campaign started spending on TV ads in Ohio for the first time last week.

Iowa: This is another state Trump should win, but where his advantage has declined. The state's demographics — being almost all white — still favor the president.

Texas: This traditionally Republican state didn't go as strongly for Trump in 2016 as it had for past Republicans, and current polling indicates a toss up. But Biden hasn't gotten to 50% in a poll in the state yet. If he did, it would be a real eye-opener. On the ground, Republicans still retain an advantage in voter mobilization.

For more on our methodology, which is based on a mix of public surveys, conversations with the campaigns, historical voting and demographic trends, and our on-the-ground reporting, as well as detailed paths to election for both candidates, click here.