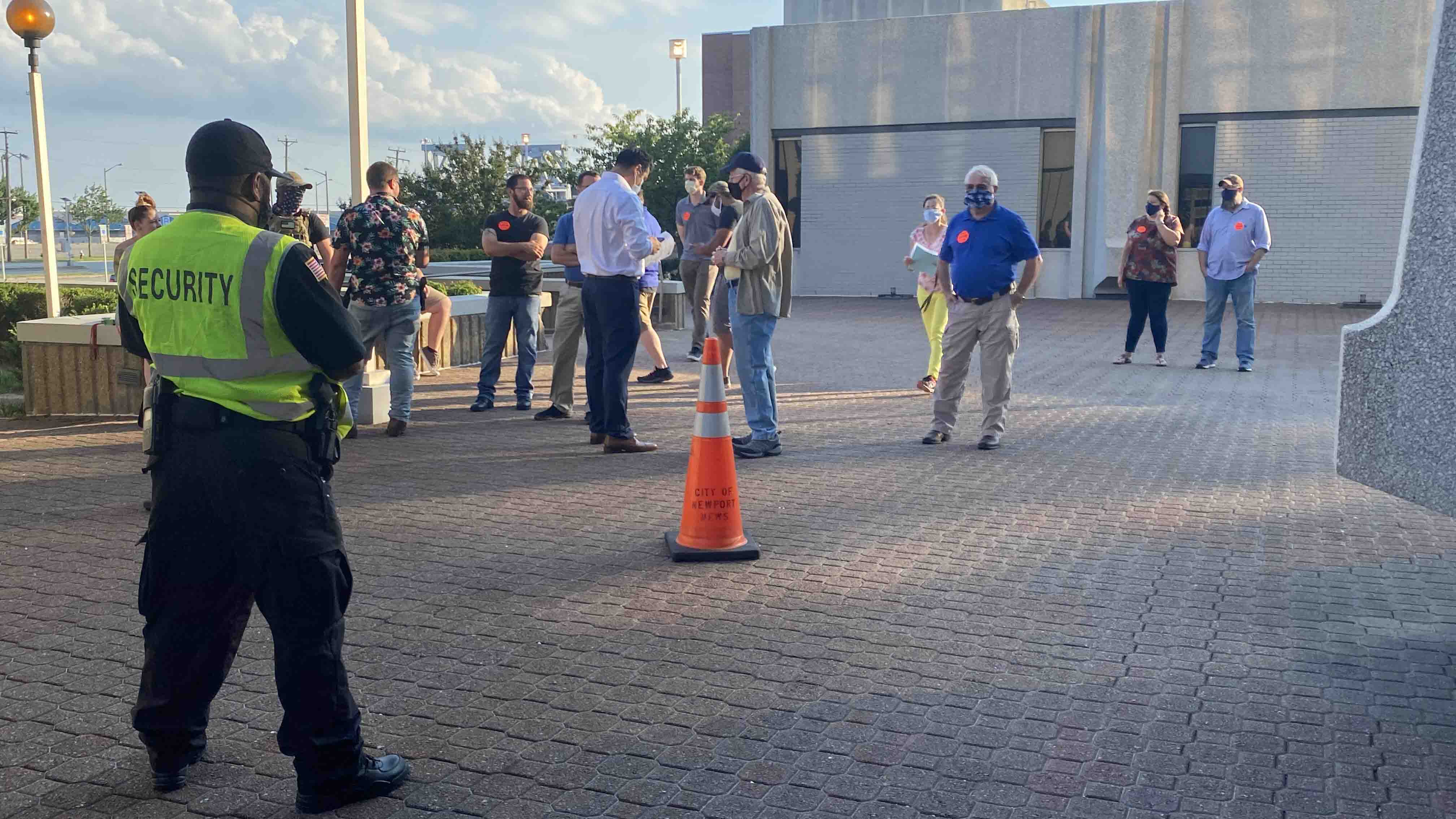 Photo by Mechelle Hankerson. People waited outside of Newport News City Hall this week to get a chance to speak about a ban on visible weapons in public spaces. Many spoke against it, bringing weapons with them or wearing bright orange "Guns Save Lives" stickers.

Taking advantage of a new state law that allows localities to decide where weapons are allowed on public property, Newport News leaders banned visible weapons from city buildings and other places.

“I brought this forward because there were some members in this building who have approached me about not feeling safe in their offices, especially when you see people coming in to complain,” Mayor McKinley Price said this week at a City Council meeting.

Newport News’ ordinance prohibits openly carrying a gun in almost all city-owned property, including buildings, parks and streets, and any place that is being used for a city event.

It went into effect immediately upon council approval Tuesday night.

The city is the first in Hampton Roads to pass a local ordinance since the state law went into effect July 1.

State Del. Marcia Price, who represents Newport News and is the daughter of Mayor Price, carried the state legislation that granted the power to localities to make such a change. It was introduced six times before it passed.

She was one of two people who spoke in favor of the proposal at Tuesday’s council meeting.

"We often hear about personal safety from those who have spoken against the ordinance, but what about workplace safety and family safety for residents as they navigate the public spaces?" she said.

Gun control opponents opposed Del. Price’s law at the state level and showed up in Newport News to reiterate their dislike of the legislation.

A small group of opponents came with large rifles, wearing military fatigues with face coverings. Others carried rifles and wore Hawaiian shirts, an unofficial uniform adopted by the anti-government group, the boogaloo boys. One speaker identified himself as being part of the group, in which some members aim to start a race war.

Most of Tuesday night’s speakers were against the ordinance and displayed the bright orange “Guns Save Lives” stickers, a marker of the Virginia Citizens Defense League, which lobbies against gun control measures around the state.

Mayor Price said that kind of display was part of his decision to introduce the new local law.

“Someone hanging an automatic weapon around their neck coming in is intimidating to me, I’ll admit it,” he said. “Our staff doesn’t have an armed guard protecting them.”

Opponents said banning open carry on city property was unconstitutional. Some even told the majority Black council it was racist.

A.C. Cordoza, a Hampton resident who works in Newport News, said that’s why he opposed the rule. He’s a Black gun owner.

Philip Van Cleave, president of the Virginia Citizens Defense League, echoed the sentiment. He traveled from the Richmond area for the Newport News meeting. Van Cleave said people were acting on their discomfort with weapons.

“My argument to City Council was that there are people who are uncomfortable around minorities, so are they suggesting that we should also get rid of minorities?” he wrote in an email to VCDL members after the vote.

Councilwoman Patricia Woodbury was the only one to vote against the rule.

The state law was just one in a suite of gun control legislation that went into effect July 1. The list includes a one-handgun-a-month purchase limit; universal background checks for gun purchases and reporting stolen or missing firearms.