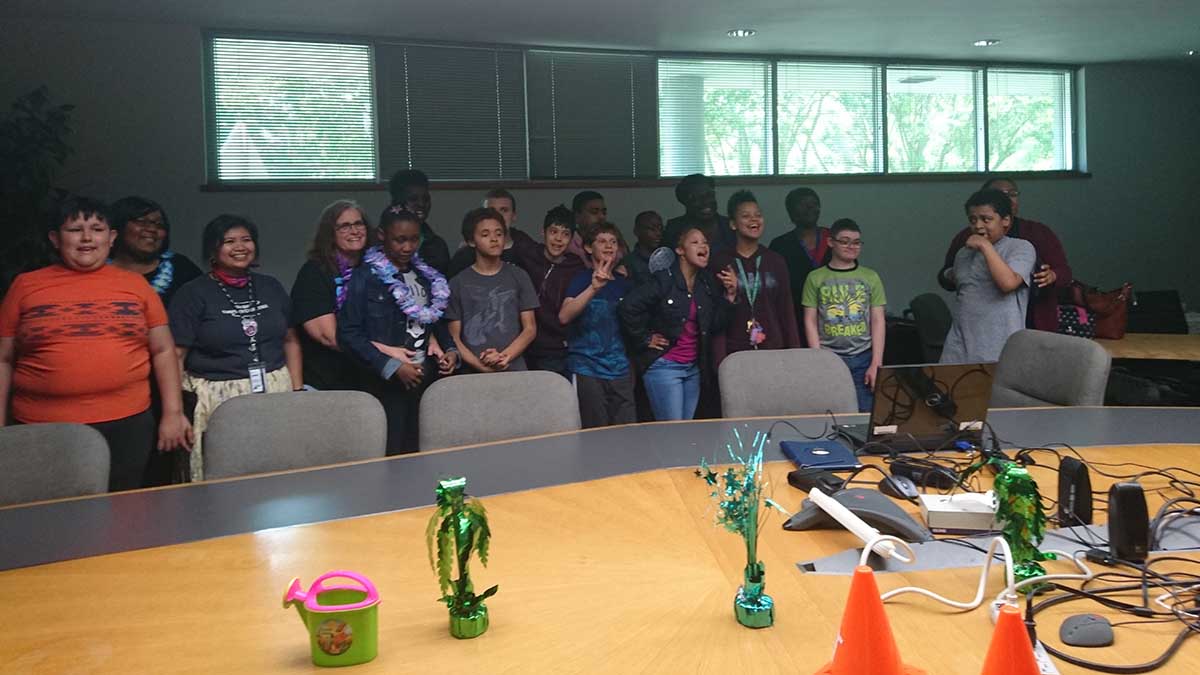 These children are from John Yeates Middle School, in grades sixth through eighth. Today, they are on a field trip to tour WHRO, the television and radio station that airs all their favorite PBS Kids shows. After being introduced to Ms. Debra at the front desk, the children are ushered into the conference room next door, where they sit patiently to pick out various dress-up garments from the kid-friendly, plastic bins. There are big sunglasses, pull-on sparkly, butterfly wings, shiny, beaded necklaces and even regular sized glasses, with a black mustache and big nose attached. The kids are called by name, one by one to pick a fun, dress up item to wear during the remainder of the tour.

Ms. Rosalie Rodriguez, an educational specialist at WHRO, informs them that they will visit the records room and politely reminds them to keep them hands to themselves and to "look with your eyes". The records room is small and filled with shelves of CDs and old records that line the wall and seem to fill most of the room. After passing through, the kids are guided to the TV Master Control Room, where they are introduced to Mr. Robert, WHRO's producer and editor who directs the annual Virginian-Pilot Spelling Bee, as well as Ms. Kathy, the producer and writer from The Writer's Block, and Mr. Paul, who produces educational initiatives. The kids admire the TV monitors and listen attentively to Mr. Robert, while one of the WHRO volunteers, retired engineer Kent Lion -- dressed in a festive, green grass skirt -- takes photos.

Afterwards, the group walks down the hall to the TV Studio Control room to meet Mr. Greg. There, the kids enter the studio space and situate themselves in front of the "green screen". Some gather around a big camera and take turns reading lines from the Gettysburg Address, while an audio engineer helps them along,  using a teleprompter. Mr. Greg continues speaking, while a few kids admire their reflections on the television monitor.

"I like the animations", says Caleb Torres, one of the students from the autistic class. He is interested in computer programming, more specifically the Microsoft program, Paint. Torres is one of a few students that inspired Ms. Rodriguez to plan this tour in the first place.

The children are given an opportunity to dance across the "green screen", while Mr. Greg operates the big camera and records them. Some kids jump up and down in excitement and others sway to and fro, while the techno music plays. Unknown to some of the kids, the background changes. One appears to be dancing on a lawn, while the others dance in front of a neon light that spells 'dance'. The overhead studio lights even flickered and changed colors from yellow to orange to blue.

When asked about her favorite part, another student, Shayla Boynes, would later say "my favorite was dancing".

Mr. Greg then shows them "Big Bird", a yellow escalator machine that helps the engineers, like Mr. Greg, reach the ceiling to change the light bulbs. He demonstrates and the kids watch in awe as "Big Bird" noisily lifts Mr. Greg up to the ceiling and back down. They all want to give it a try, but Ms. Rodriguez tells them that they have to be trained. She then directs the group to the production suite to meet Mr. Kenny, one of WHRO's television producers. He shows the children the video he just edited, much to their surprise, which shows their teachers dancing, one of the volunteers, Maura Lansing, wearing her sparkly butterfly wings, and more importantly, the rest of the children dancing. Everyone starts laughing and the kids scream and cheer gleefully as they see their peers dance across the screen.

The tour ends with lunch and while the teachers and teacher assistants distribute the food, the room gradually falls silent as the children eat.

After lunch the children watched a demonstration about how to code using the PBS Kids Scratch Jr. app. The app helps kids learn to solve problems, design projects and express themselves creatively using computers.

Keisha Jones, one of the teachers from John Yeates Middle School, says she thought the whole experience was wonderful since many of her students in attendance are interested in television. "I'm thankful for WHRO to come and tour here," she says. "I'm thankful for the staff and everyone being so pleasant."

Watch the video the students created:

Want to stay up to date on all that WHRO Education and WHRO Kids offers?
Sign up for our parents’ newsletter, and visit whrokids.org and education.whro.org.