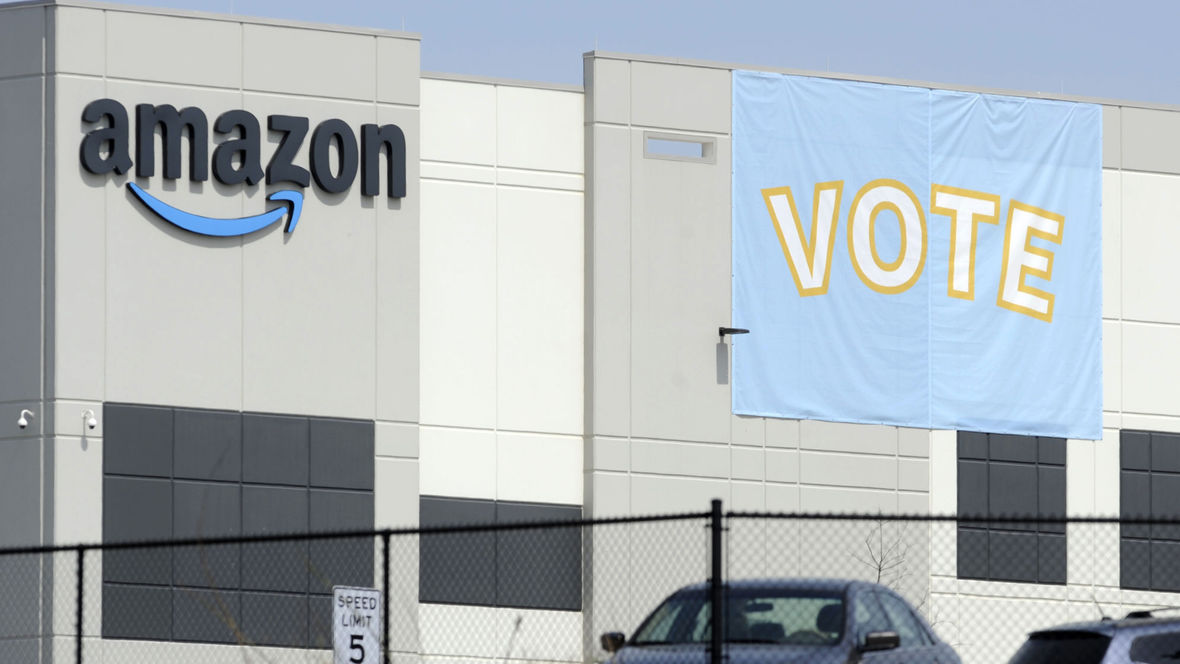 A banner encourages workers to vote in a union election at Amazon's warehouse in Bessemer, Ala.

Why Is The Amazon Union Vote Count Taking So Long?

The results of the 2021 election that everyone has been awaiting with bated breath are taking a while.

Blame it on mail-in votes. Yes, this one, too.

The results of the historic Amazon union vote in Alabama, which ended more than a week ago, are still a few days away. The count of yes and no votes began on Thursday. A potential reveal is on the cards for Friday at the earliest. Here's what we know so far.

It's a really large mail-in election.

The National Labor Relations Board has received 3,215 ballots from workers at Amazon's warehouse in Bessemer, Ala. That's according to the Retail, Wholesale and Department Store Union, which is looking to represent this workplace. It's also a remarkable turnout of more than 50%.

On Wednesday evening, NLRB agents completed the first part of the process. It involved opening letters and calling out each voter's name so that Amazon or union representatives could object to that voter's eligibility. For example, the worker may no longer be employed at Amazon or the Bessemer warehouse.

Hundreds of ballots have been challenged, the union says, mostly by Amazon. These ballots are then set aside and may play a huge role if the tally of uncontested votes produces a result that's so close that these set-aside votes could sway the outcome.

Afterward, the vote-count moved on to the next step. Inside that first letter was a second sealed envelope containing the anonymous ballot. That second set of envelopes required opening and shuffling.

On Thursday afternoon, the hand-counting of yes and no votes finally started. This tabulation of anonymous ballots is being streamed online for preregistered members of the media and the general public.

In short: Mail-in ballots take a while to process. The NLRB ruled to hold this election by mail because of the coronavirus pandemic.

Why is this union vote so highly watched? Here are some overviews of what's at stake: