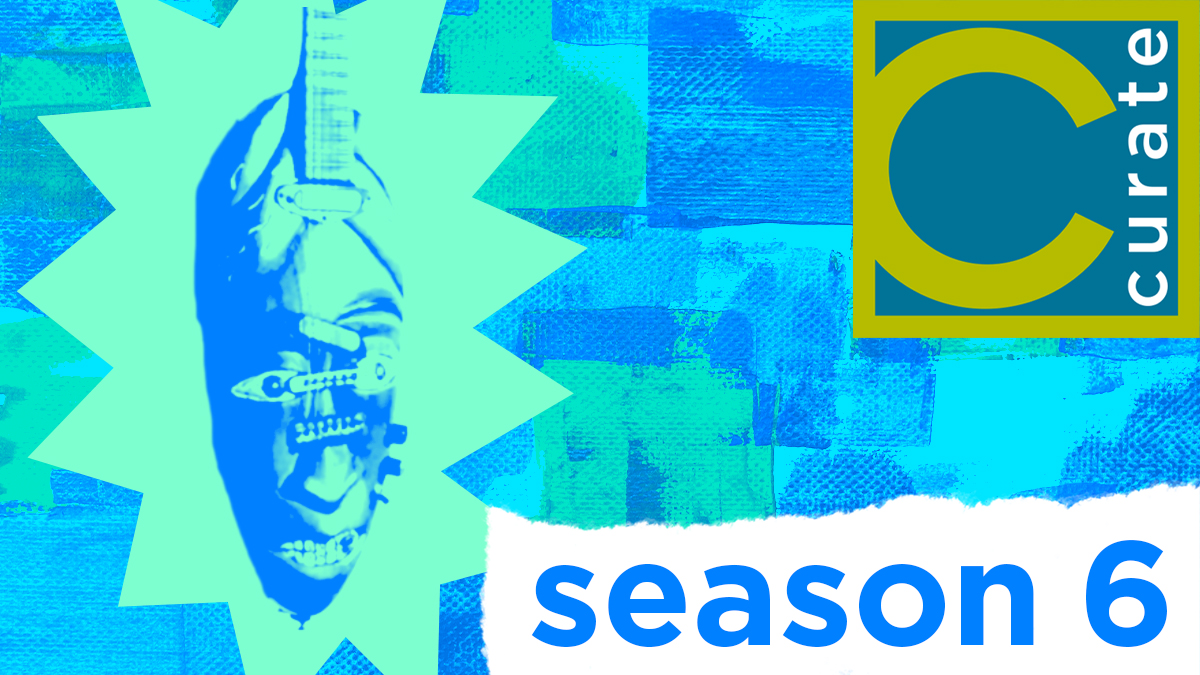 Curate Returns! Join Us For Season 6

Curate is back! The popular arts series explores the thriving art scene in our own backyard and across America. Join hosts Heather Mazzoni and Jason Kypros for the new season premiering Friday, Oct. 29, at 8:30 p.m.

Check out the exciting lineup of new episodes for this season below.

Episode 1
Portsmouth musician Greg Gutty has created a new sound called Rehipsoul. It’s an updated fusion of Reggae, Hip-Hop and Rhythm and Soul. Described as an old soul with a new twist, Gutty is a passionate young singer who has been performing since the age of 5.

Episode 2
Windsor photographer Tom Siegmund, professor of art and head of the photography department at the Visual Center at Tidewater Community College, is a working artist who specializes in fine art photography and has exhibited his work since the early '90s.

Missed an episode? Want to watch a previous season?
Catch up online.

Episode 3
Freeman Vines is an artist, a luthier and a spiritual philosopher who has transformed materials culled from forgotten landscapes in his relentless pursuit of building handcrafted guitars, each instrument seasoned down to the grain by the echoes of its past life.

Episode 4
Artist Randy Battaglia, known better as Ramblin’ Randy, has found success in painting shop windows and murals in Virginia Beach. He also works on canvas and plays a pretty guitar, and he does all this while living in a van. Randy is homeless, but despite his struggles, his art shines through and provides a window to a very creative soul.

Episode 5
Nastassja Ebony Swift is a multi-disciplinary artist and Virginia native. Earlier this summer her solo exhibit in Hampton, Canaan
when I read your letter, I feel your voice featured an installation and collaborative performance that intimately displayed the exchange between her and her brother, who is currently incarcerated.

Episode 6
Norfolk’s Virginia Stage Company in collaboration with the NSU Theatre Company celebrates the 757 with The Earth Remembers, an original song cycle that tells the story of the Tidewater area from a diverse perspective amplifying the voices of Black, Indigenous and Filipino foundations of our community.

Episode 8
The Downing-Gross Cultural Arts Center in Newport News celebrates the visionary art and life of Elder Anderson Johnson. The son of a sharecropper, he traveled throughout the United States teaching himself to draw, play piano and guitar and preach the gospel.

Episode 9
Caroline Scruggs is a Williamsburg singer and musician who incorporates her voice, a loop station and the theremin into her music. In addition to her solo work, she also performs with 504 Supreme and the Truetone Honeys.

Episode 10
Portsmouth native Jerry “Swamp Dogg” Williams is an American soul and R&B singer, musician, songwriter and record producer. He’s been described as one of the great figures of 20th century American music.

Episode 11
Chef Antonio Caruana, owner of Norfolk’s Luce restaurant, prepares dishes from his heart and soul while paying respect to the origins and traditions of Italian food, twisting it together with his own twist, taste and flair! Caruana is in the process of opening his second restaurant, Secondo at Summit Pointe in Chesapeake.

Episode 12
Virginia Beach native Ralph Reynolds partnered with rapper T.I. to create AKOO, which stands for “A King of One’s Self,” a streetwear brand that represents artistry, culture, fashion and innovation.

Episode 13
WPA, Work Program Architects, have partnered with many creative agencies in Norfolk to create Assembly, a space to connect ideas and the people who make them. The new space is an architectural marvel, restoring three historic shopping centers in downtown Norfolk.