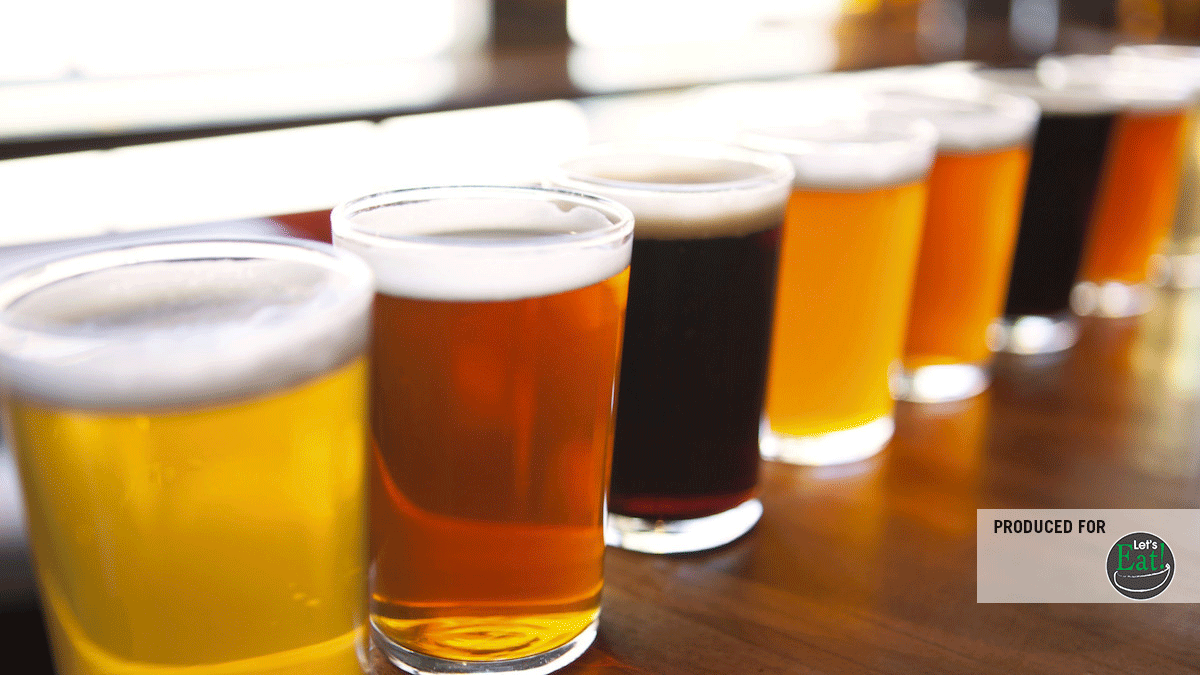 What is Craft Beer?

On May 16th and 17th, the Virginia Beer Festival, a two-day festival returns with the finest beers from dozens of breweries from around the world. Named one of the best beer festivals by USA Today (2013), this event takes place in Town Point Park in downtown Norfolk, featuring 65 breweries with more than 125 beers to sample. See full list of breweries and beers for tasting.

With all of this beer, it's hard to understand what a craft beer is and where it came from. The Association of Brewers reports that in 2012 there were a total of 2,347 craft breweries (1,132 Brewpubs, 1,118 Microbreweries, 97 Regional Craft Breweries) in the United States. Today there are even more.

When trying to define craft beer, each beer lover has a unique interpretation and story of discovery to share. To make a true craft beer definition even more difficult, each individual beer brand is one of a kind.

However, the Brewers Association, does define an American craft brewer. This definition allows the organization to provide statistics on the growing craft brewery segment, which makes up the majority of all breweries in the U.S.

An American craft brewer is:

Small  - Annual production of 6 million barrels of beer or less (approximately 3 percent of U.S. annual sales). Beer production is attributed to the rules of alternating proprietorships.

Independent -  Less than 25 percent of the craft brewery is owned or controlled (or equivalent economic interest) by a beverage alcohol industry member that is not itself a craft brewer.

Traditional  - A brewer that has a majority of its total beverage alcohol volume in beers whose flavor derives from traditional or innovative brewing ingredients and their fermentation. Flavored malt beverages (FMBs) are not considered beers.

An historic timeline of beer:

over 5,000 years ago - Beer was part of the daily diet of Egyptian Pharaohs over 5,000 years ago. Then, it was made from baked barley bread, and was also used in religious practices. Historical documentation shows that around 5,000 years ago, ancient Chinese civilizations were brewing a beer-like substance known as kui.

2500 BC - Early traces of beer and the brewing process have been found in ancient Babylonia as well. At the time, brewers were women as well, but also priestesses. Some types of beers were used especially in religious ceremonies.

2100-2000 BC - In 2,100 BC, the Babylonian king Hammurabi included regulations governing tavern keepers in his law code for the kingdom. Beer drinking accessories, such as mugs, have also been found in Israel, and date back to nearly 2000 BC.

500-450 BC - Based on historical evidence, it appears that the Egyptians taught the Greeks the beer brewing process. The Greek writer Sophocles (450 BC) discussed the concept of moderation when it came to consuming beer in Greek culture, and believed that the best diet for Greeks consisted of bread, meats, various types of vegetables, and beer or zythos as they called it.

The process of brewing beer grew tremendously during the rise of Christianity. This was primarily because of the roles that monks had in the production of beer. Monasteries were some of the first organizations to brew beer as a trade. Monks built breweries as part of their efforts to provide food, shelter and drink to various travelers and pilgrims.

580 BC - Saint Arnold of Metz is born, one of dozens of patron saints to beer, brewers and hop-pickers. He helps end a plague by convincing people to drink beer rather than impure water.

770 AD - Emperor Charlemagne, the ruler of the Christian kingdom considered beer to be an important part of living, and is often thought to have trained Christian brewers himself. As in ancient times, women were the primary brewers during the Middle Ages. Women took over brewing after the monasteries had really established the process. Ancient Nubians had used beer as an antibiotic medicine.

1040 - The oldest still operating commercial brewery is the Weihenstephan (Bavaria) abbey brewery, which obtained the brewing rights from the nearby town of Freising in 1040.

1256 - The Aldobrandino of Siena described the nature of beer in the following way: But from whichever it is made, whether from oats, barley or wheat, it harms the head and the stomach, it causes bad breath and ruins the teeth, it fills the stomach with bad fumes, and as a result anyone who drinks it along with wine becomes drunk quickly; but it does have the property of facilitating urination and makes one's flesh white and smooth.

1300-1400's - Hopped beer was perfected in the towns of Germany by the 13th century, and the longer lasting beer, combined with standardized barrel sizes, allowed for large-scale export. This type of production spread to Holland in the 14th century and later to Flanders, Brabant and reached England by the late 15th century.

Laws to enforce the use of hops in beer were introduced in England in the 14th century, and later similar laws were introduced in other countries. In England, these laws led to peasant uprisings, since it was considered to spoil the taste, but these uprisings were brutally put down.

In 15th century England, an un-hopped beer would have been known as an ale, while the use of hops would make it a beer.

1516 - The Reinheitsgebot, instituted in Bavaria, is a beer “purity law” that remains today in revised form. The original laws permits beer to be made only with barley, hops and water, later acknowledging yeast and permitting wheat.

1716 - The tavern that will become known as the Wayside Inn after being immortalized in Henry Wadsworth Longfellow’s Tales of a Wayside Inn opens in Sudbury, Massachusetts. Nearly 300 years later it’s oldest continuously operating inn in the United States.

1814 - A storage vat at the Horse Shoe Brewery in London containing more than 300,000 gallons of porter collapses, knocking down brewery walls and flooding immediate area. Eight people are killed, “by drowning, injury, poisoning by porter fumes, or drunkenness.”

1857 -  The discovery of yeast's role in fermentation in 1857 by Louis Pasteur gave brewers methods to prevent the souring of beer by undesirable microorganisms.

1817 - The invention of the drum roaster Daniel Wheeler allowed for the creation of very dark, roasted malts, contributing to the flavor of porters and stouts. Its development was prompted by a British law of 1816 forbidding the use of any ingredients other than malt and hops. Porter brewers, employing predominantly pale malt grist, urgently needed a legal colorant. Wheeler's patent malt was the solution.

1919 - The 18th Amendment is ratified and goes into effect outlawing the sale of alcohol in the United States.

1933 - President Franklin Roosevelt signs into law legislation permitting the sale of 3.2% a beer.

1920 - Prior to Prohibition, there were thousands of breweries in the United States, mostly brewing heavier beers than modern US beer drinkers are used to. Beginning in 1920, most of these breweries went out of business, although some converted to soft drinks and other businesses.

1944 - Because it is not practical to ship beer, the HMS Menestheus, a British mine-laying ship, is converted into a floating brewery to supply beer to British and Allied troops in the Asian theater during World War II.

1945 - Bottling beer began in a modern facility, 1945, Australia. Unlike in many parts of the world, there is a significant market in Europe (the UK in particular) for beer containing live yeast. These unfiltered, un-pasteurized brews are awkward to look after compared to the commonly sold dead beers: live beer quality can suffer with poor care, but many people prefer the taste of a good live beer to a dead one. While beer is usually matured for relatively short times (a few weeks to a few months) compared to wine, some of the stronger so-called real ales have been found to develop character and flavor over the course of as much as several decades.

1953 - New Zealander Morton W. Coutts developed the technique of continuous fermentation. Coutts patented his process which involves beer flowing through sealed tanks, fermenting under pressure, and never coming into contact with the atmosphere, even when bottled. His process was introduced in the US and UK, but is now used for commercial beer production only in New Zealand.

1957 - The late Michael Jackson, “The Beer Hunter”, drinks his first beer at the Castle Hill Hotel in Huddersfield, Yorkshire. Twenty years later he writes The World Guide to Beer, one of the inspirations for a “beer revolution.”

1972 - Development of Cascade hops begins in Corvallis, Oregon, in 1956. The hop is released to brewers in 1972 and becomes a hallmark aroma and flavor for beer from American small-batch brewers.

1997 - Jack McDougall of New Jersey wins the first US Beerdrinker of the Year competition sponsored by Wynkoop Brewing in Denver. McDougall is an original member of the Bar Tourists of America, a loosely organized group that held its first tour in 1978.

2008 - Smithsonian Magazine states: “The best beers in the world today are being made in the US.”