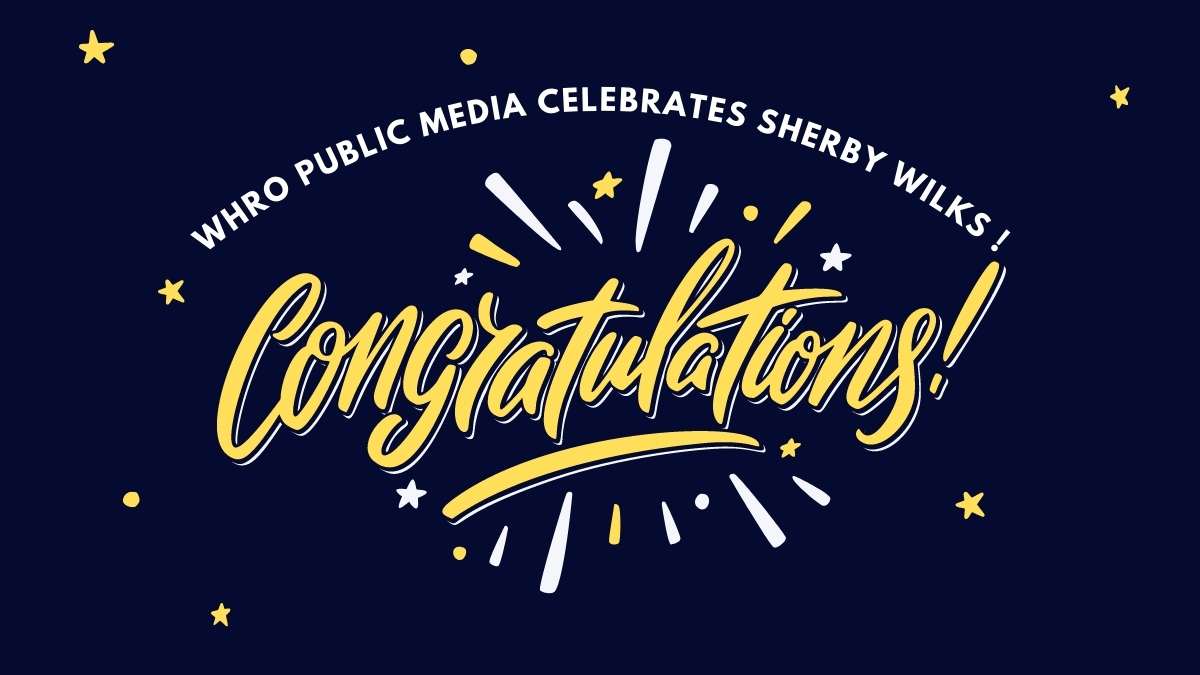 WHRO Public Media is excited to congratulate longtime employee Sherby Wilks on her retirement after nearly 37 years of service. She began at the station in August 1985 in a clerk/typist position. Having relocated to Virginia from Connecticut only one month after getting married, she said she wasn’t really looking for a job. However, working at a TV station sounded interesting so she applied.

“Lo and behold, they actually called me right away for an interview,“ she said. The interview turned out to be on a very hectic day. Sherby and her husband were moving from their temporary housing into their new home in Newport News—that same day. She hurriedly changed clothes after the move and headed to the interview. ”I didn’t even know how to get to Norfolk,“ she said.

She soon received a call letting her know she got the job. She brought with her more than 12 years of experience working in Human Resources for a large company in Connecticut, and it wouldn’t be long before she was asked to put those skills to use at WHRO. Throughout her time with the organization she has held many titles—personnel coordinator, human resources manager, human resources director and human resources officer—but most coworkers know her first and foremost as a friend.

“I have not known a WHRO without Sherby,” said WHRO President and CEO Bert Schmidt. “She was a part of my morning routine, greeting each other every morning as I walked towards my office to start the day.”

Staff also know her as someone who is very thorough, detail-oriented, and great at her job.

“Sherby’s attention to detail ensured that we always navigated through the myriad of industry rules and regulations with flying colors,” Bert explained.

CFO Amy Sokol agreed. “She made sure WHRO never missed an FCC compliance deadline, and she was great at making sure WHRO staff knew exactly the documentation they needed to keep in order to be compliant.”

Yet it is Sherby’s personal touch that most employees mention when asked about her. “Sherby knew each and every person who ever walked through the halls during the 37 years she worked at WHRO,” Amy said. “Believe it or not, people forget they have money in their retirement accounts. She would go above and beyond the HR call of duty to ensure that all staff and even staff members of decades ago knew how to access their retirement funds.”

As Sherby reflected on her new retired status, she said she is proud to look back over the work she has done through the years and see that some of the things she began still remain a part of the organization including an employment service awards recognition program that she worked on and an internship program that she developed many years ago. She said what she will miss most about her job is the ability to help people. “I tried to make a difference in what I was doing and tried to keep the staff happy.”

Though she said her retirement hasn’t fully hit her yet, she is looking forward to having time to do more of the things she enjoys—travel, mission work with her church and reading. She and her six siblings travel together a lot and already have two upcoming trips in the works. Sherby said she typically handles much of the planning. “I guess now I'll be the travel agent.”

She is also looking forward to cooking more, an activity she really enjoys. “I got all these recipes that I've been saving, so now I can try my luck,” she said.

Media Operations Manager Rhonda Hayes said she has no doubt Sherby will find ways to fill and enjoy her free time. “We’re country girls from a farm, and after a long journey of hard work, I know you know how to retire in style,” she said. “You’ve slayed so many dragons on our behalf and for all those impossible missions you’ve conquered and stayed true to yourself. Thank you and happy retirement!”

Sherby said she plans to visit WHRO from time to time to check in with everyone as staff members have let her know they are already greatly missing her.

“For over 20 years Sherby has been a staple to WHRO and to me,” explained Nicole Cleveland, director of membership. She will missed immensely. I’m not sure what we’ll do without her.”

Staff may no longer get to see her at the office each day, but the impact and legacy she is leaving behind will always be a part of WHRO.

“Sherby will forever be the voice in the WHRO walls,” Amy said. “She was an amazing coworker. I wish I would have had more than two years of learning from and laughing with her. I’ve been lucky to meet and work with someone as dedicated and passionate as Sherby.”

We all feel that way.

Congratulations on your retirement, Sherby!