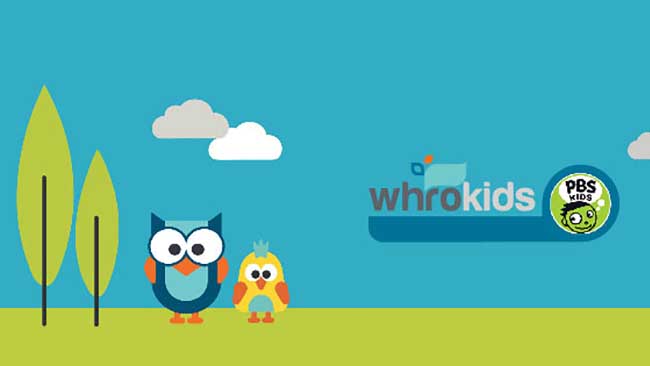 WHRO Kids Brings the Fun to You

Did you know your children can access their favorite shows and games from wherever they are—whether in your home or on the go? Through its television channel, website, and mobile app, WHRO Kids provides meaningful, engaging content that entertains as well as teaches. Recently, the American Academy of Pediatrics suggested that children as young as 18 months can benefit from high-quality educational media, and specifically named PBS KIDS as an example of such programming. This is probably why in a national survey of parents with children aged 2 to 6, PBS KIDS programs were found to be the most trusted and relied upon for school readiness, ranking first in every measured skill.

Above all, kids and parents love the content. Adrien Bellin, of Norfolk, is a mom of two young boys – Samuel (5) and John (4). She greatly appreciates how much WHRO Kids enriches her kids’ free time. Samuel started watching WHRO Kids programming when he was just 1 year old; he had trouble swallowing his food because he would concentrate too hard on it, so they would put on Curious George to distract him. Nowadays, Bellin loves seeing her sons connect what they watch to things in their everyday lives. She said that shows like Nature Cat get her boys so excited to go outside that they even go on ‘Nature Cat Walks,’ to observe nature with their dad, calling upon things they learned from the show. Bellin and her boys also love the games and apps that go along with their favorite shows, like the Wild Kratts Powersuit Maker.

Martha Razor, WHRO’s Early Childhood Coordinator, has seen the impact of WHRO Kids programming as she conducts trainings in the community. “So many parents tell me all the time, ‘That’s all my child watches.’ People just don’t know how much we have an influence on children in our area.” She said she can always recognize students who consume PBS content because their vocabulary tends to be expanded for their age. Carolyn Harris, a kindergarten teacher at Carver Elementary School, in Newport News, agreed. “It has been a benefit to my students, and I just think about how many other children it could benefit if people tap into the resources.”