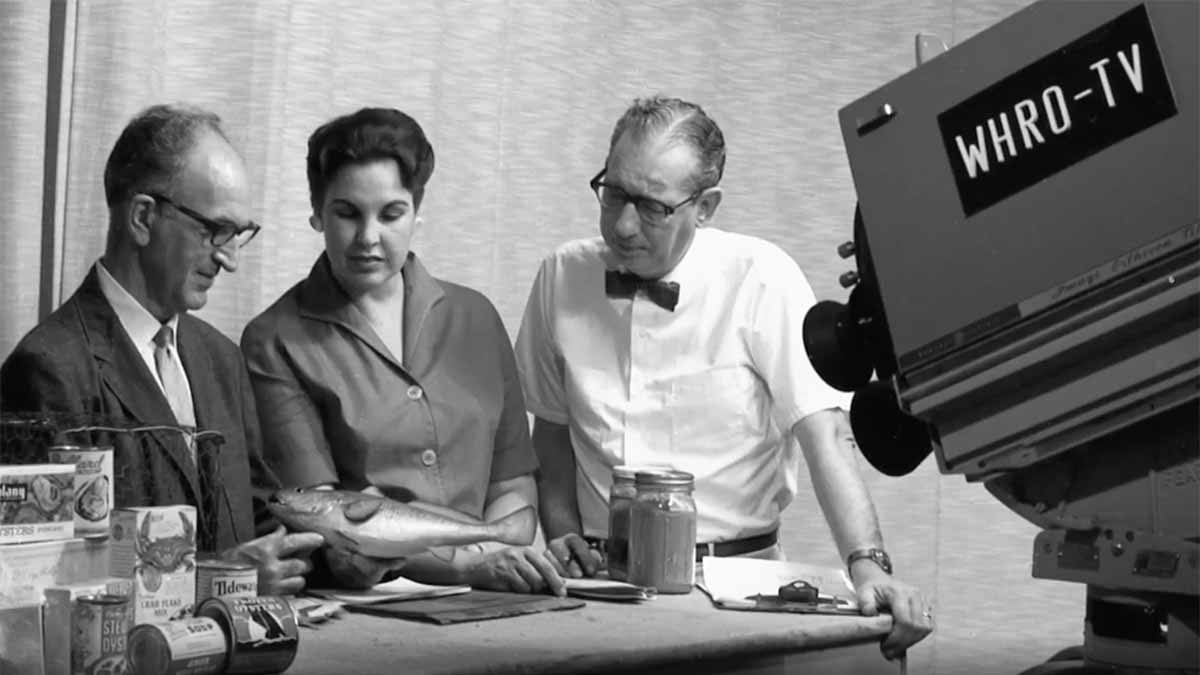 As we celebrate our 60th anniversary this year, we’ve heard well wishes from many of our community partners, underwriters and long-time employees. Here is a sampling of messages we’ve received.

Read more about the 60th anniversary at whro.org/60

“For 60 years now, WHRO Public Media has enriched the community, with educational, informative, and intelligent programming, benefiting our schools, and our children. We applaud them on their anniversary, pledge our continuing support, and encourage others to support them as well.”
Scott Wheeler
Bay Diesel & Generator Chairman

“BridgeTrust Title Group is proud to be a longtime supporter of WHRO and would like to congratulate you on your 60-year anniversary! We appreciate the outstanding programs and value that WHRO brings to our communities and we look forward to celebrating many more years with you!”
BridgeTrust Title Group

Since my parents, Ed and Jean Snyder founded Checkered Flag in 1964 and began to support public media in Eastern Virginia, it is an honor to be WHRO’s longest consecutive partner.

"We share a birthday in common with WHRO and a commitment to serving Hampton Roads and Virginia. As WHRO and Christopher Newport celebrate 60th anniversaries, we wish our partners in broadcasting CNU's Holiday Happening and so many other wonderful programs the very best for the future. We'll be watching."
Christopher Newport University

“Congratulations on providing great programming to our region for 60 years. Robert and I are proud supporters and value the news and entertainment WHRO bring to us. Dependable and accurate news, great interviews and insight from our public servants and esteemed professionals enrich our daily lives. Thank you so much.”
Claus Ihlemann
Decorum

“The Hampton Roads community is fortunate to have WHRO as part of the region’s public broadcasting system. The programs that air on this important community resource provide rich and entertaining content that broadens our understanding and feeds our imagination. Much like Colonial Williamsburg’s educational mission, WHRO is committed to offering programming that put world events in broader context.
Cliff Fleet
President and CEO of The Colonial Williamsburg Foundation

“For six decades, public media has played a large role in educating Hampton Roads about health and safety practices, informing us about the latest medical breakthroughs and leading important discussions about the healthcare in the region. Our community is wiser, healthier and safer because of WHRO and WHRV. Happy 60th anniversary!”
Lake Taylor Transitional Care Hospital

“Congratulations to WHRO on achieving its 60th anniversary, growing stronger and more exciting with every passing year. Norfolk Academy is proud of its longstanding partnership with the station, particularly in support of bringing the work of pioneering documentary filmmaker Ken Burns to local audiences. WHRO educates people of all ages, of course, but as the nation’s eighth oldest school, Norfolk Academy is most appreciative of the station’s outreach to students, through interactive programs that teach and inspire thoughtful action. Thank you, WHRO, for all you do to make our community better!”
Dennis Manning
Headmaster of Norfolk Academy

“WHRO was the very first organization I joined after moving to Coastal Virginia in 2014. I am a longtime supporter of public radio and WHRO is one of the best in the country. Congratulations WHRO on 60 years of information, education and entertainment for our great region!”
Michael Desplaines
Norfolk Botanical Garden President & CEO

“Some of the greatest moments in journalism have occurred as a result of public broadcasting. Stations like WHRO have provided fact-based content and fostered important discussions about health, education, municipal and state government, finance and other topics that have enriched local communities. Many NSU faculty and alumni have appeared on WHRO programming throughout the years. The station is an important institution in Hampton Roads and serves its viewers and listeners with quality journalism projects to help the public become more educated and engaged. Norfolk State University congratulates WHRO on celebrating its 60th anniversary.”
Norfolk State University President Javaune Adams-Gaston, Ph.D.

“Congratulations to our corporate partners at WHRO/WHRV public television and radio on their 60th anniversary! Public television and radio not only educates our communities, but it enlightens them to the possibilities of what they can be in their personal and professional lives and how they choose to interact with the world around them. Orthopaedic & Spine Center in Newport News is delighted to have partnered with WHRO/WHRV for years in bringing news, information and entertainment to the Hampton Roads area, and we look forward to a long and rewarding partnership of serving the communities in which we live, work and thrive.”
Jeffrey R. Carlson
President & Managing Partner, Orthopaedic & Spine Center

“We celebrate the WHRO staff for its 60 years of service to Hampton Roads. Our community is grateful for the enriching educational services and informative content that WHRO provides,” said Sentara Healthcare President and CEO Howard P. Kern. “Our similar missions to better the health and well-being of our communities are the foundation for a long-standing relationship between WHRO Public Media and Sentara Healthcare. While Sentara has approached this mission through medical innovations and community support, our friends at WHRO have dedicated six decades to educating our children and community through public media and creative arts. We thank them for their service and partnership, and wish them continued success.”
Sentara Healthcare

“Happy Anniversary to WHRO! We value our partnership and look forward to working together in the years to come to ensure our Hampton Roads clients, such as TRAFFIX Commuter Options, reach your valuable audience of area employers and commuters.”
Siddall Communications

“I want to take the time to wish WHRO Public Media a happy anniversary as they turn 60. WHRO Public Media is everything you need in public television. For me as a kid, I always think about my favorite shows such as Electric Company and the Bloodhound Gang that I used to watch all the time. These days my students and my kids use WHRO for both education and entertainment.

Our students, our school community and our families can have access to public information education and television 24 hours a day, 7 days a week through channels like WHRO. It is really allowed us to use public television as a vehicle for learning....

WHRO’s educational response to COVID-19 was excellent. Their partnership with the Virginia Department of Education showed us that when we put our heads together we can do everything that we need in order to support our students, especially during the pandemic.

“Symphonicity congratulates WHRO on a successful 60 years! Without you the arts in Hampton Roads would not be the same. Your innovation and commitment to public broadcasting excellence has provided a framework by which your patrons and the arts community can explore and connect. As a grass-roots community orchestra, Symphonicity: The Symphony Orchestra of Virginia Beach and its 180+ volunteer musicians appreciate your support and the connections you have helped us make over the last four decades. Thank you and congratulations, WHRO!”
Symphonicity

“As an artist, the classical music on 90.3, news and current affairs on 89.5, and brilliant TV programs such as Masterpiece inspire me and my creativity every day. I am proud to have partnered with WHRO Public Media, underwriting your myriad offerings for more than 30 years. All of us at The Precious Gem wish you many more years of success. You have certainly played a part in ours!”
Reggie Akdogan, Owner/Designer
The Precious Gem, Merchants Square, Williamsburg

“Congratulations to WHRO on your 60th anniversary! TowneBank is honored to be a long-time partner with WHRO. We support your mission to enhance the lives of people in the communities you serve with educational programming, news, entertainment and civic engagement. Working with 21 local school districts, WHRO significantly impacts students throughout our region. During the pandemic, WHRO helped provide critical learning experiences for students who were studying from home.

Thank you for the impact you make every day in our community. The TowneBank family looks forward to many more years of excellence in public media.”
TowneBank

“Congratulations to WHRO on its 60th anniversary. Vandeventer Black is proud to partner with and support public media, as it is an invaluable resource for our community.“
Michael L. Sterling
Managing Partner, Vandeventer Black Law Firm

"WHRO is a cultural and educational staple of our Community. The Virginia Beach Rescue Squad Foundation is so proud to have partnered with WHRO over the years. Not only does it air the highest quality of television and radio programming, but it is an invaluable cutting-edge resource of programs and services that help make Hampton Roads a stronger region. Happy 60th Anniversary, WHRO, and thank you for all that you do!"
Gina Benefiel
Virginia Beach Rescue Squad Foundation

“Virginia MOCA is incredibly fortunate to count WHRO, one of our community’s most important assets, as an involved and supportive partner. We look forward to collaborating for the next 60 years!”
Virginia Museum of Contemporary Art

“Happy 60th Anniversary, WHRO! You have enriched our lives for 60 years through your incredible programming and are a pillar of our community! As a non-profit arts organization we are especially grateful for your gracious support of the arts, amplifying all artistic voices and celebrating them as integral to our common humanity. You are the glue that holds us all together through good times and challenging times. Here’s to you, WHRO, and all the people who make you the special public media station you are!”
Zeiders American Dream Theater

Read more about our 60th anniversary at whro.org/60.