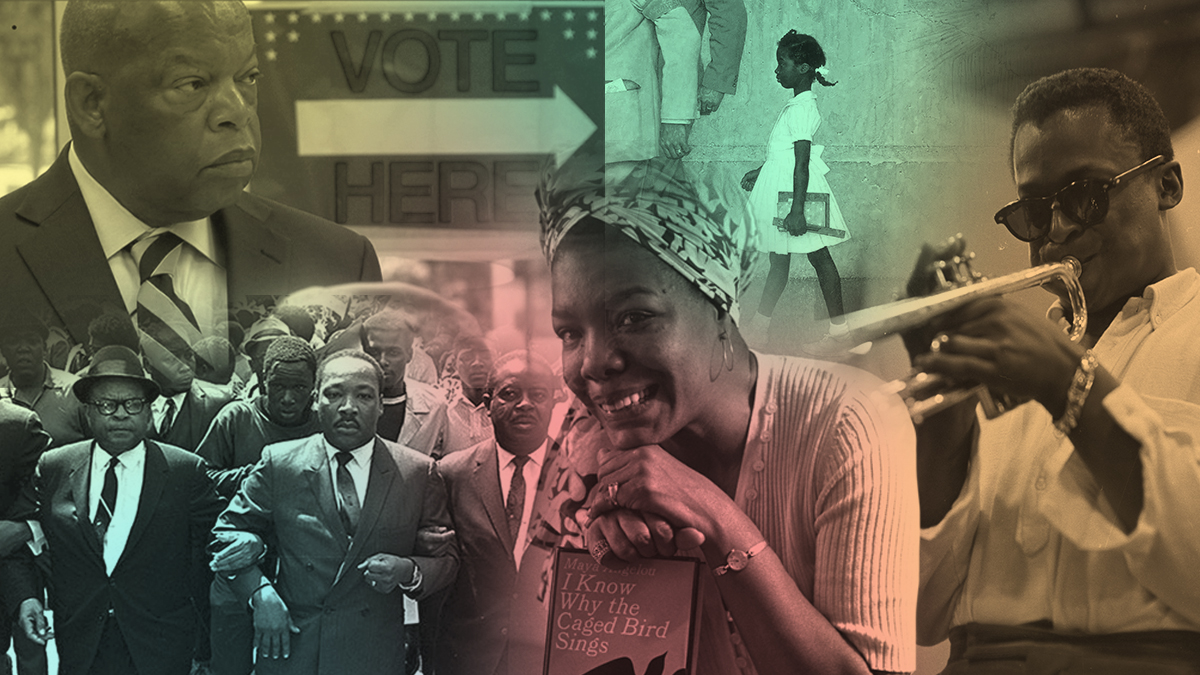 WHRO Public Media continues to explore opportunities to contribute to the national dialogue around race and racism in America. WHRO TV and WHRV have teamed up to select and provide a line-up of several relevant programs for the coming months for broadcast audiences that share Black history and celebrate Black culture.

Policing the Police: Frontline
Tuesday, September 8, 9 p.m.
In the wake of the killing of George Floyd in Minneapolis, the country has once again erupted in protest about issues of race and policing. Amidst renewed calls for widespread police reform, FRONTLINE teams up with Jelani Cobb of the New Yorker to follow up on a 2016 film Policing the Police and look at the prospects of reform in Newark, NJ.

POV "Whose Streets?
Sunday, September 13, 2 p.m.
When unarmed teenager Michael Brown is killed by police and left lying in the street for hours, it marks a breaking point for the residents of the St. Louis area and beyond. Whose Streets? is an unflinching look at the Ferguson, Missouri uprising. As the national guard rolls in, a new generation mounts a powerful battle cry not just for their civil rights, but for the right to live.

Race, Poverty and the Pandemic: Frontline
Tuesday, September 15, 9 p.m.
Frontline reports on the experience of poverty in America against the backdrop of the COVID outbreak, increasing racial tensions and a polarizing election. Set in Ohio, the film chronicles the day to day lives of children and their families as the endemic issues of race and poverty collide with the impact of the outbreak, which has had a disproportionate toll in the black community.

Black America Since MLK: And Still I Rise | Ep. 1
Sunday, September 20, 2 p.m.
Henry Louis Gates, Jr. takes a personal journey through the last 50 years of African American history, charting the incredible progress made — as well as the obstacles that remain. Features conversations with Jesse Jackson, Nas and Donna Brazile.

Black America Since MLK: And Still I Rise| Ep. 2
Sunday, September 27, 2 p.m.
Henry Louis Gates, Jr. explores America’s changing racial landscape—celebrating how far we have come toward equality and asking why we still have so far to go. Features conversations with Eric Holder, Shonda Rhimes and DeRay Mckesson.

American Experience "The Murder of Emmett Till"
Sunday, October 4, 2 p.m.
From acclaimed filmmaker Stanley Nelson, this powerful program features witnesses, friends, and family members who reveal how, in August 1955, the inadvertent violation of a sacred code of the South cost a black teenager from Chicago his life.

Freedom: Riders: American Experience
Sunday, October 11, 2 p.m.
From award-winning filmmaker Stanley Nelson (Wounded Knee, Jonestown: The Life and Death of Peoples Temple, The Murder of Emmett Till) Freedom Riders features testimony from a fascinating cast of central characters: the Riders themselves, state and federal government officials, and journalists who witnessed the Rides firsthand. The two-hour documentary is based on Raymond Arsenault's book Freedom Riders: 1961 and the Struggle for Racial Justice.

Freedom Summer: American Experience
Sunday, October 25, 2 p.m.
Directed by acclaimed filmmaker Stanley Nelson (Freedom Riders, The Murder of Emmett Till), Freedom Summer highlights an overlooked but essential element of the civil rights movement: the patient and long-term efforts by outside activists and local citizens in Mississippi to organize communities and register black voters — even in the face of intimidation, physical violence and death.

Represent: Independent Lens
Monday, October 26, 10 p.m.
In Detroit, rural Ohio, and Illinois, three women take on entrenched political systems in an effort to reshape local politics. “Represent” follows their journeys on and off the campaign trail and reveals how female candidates of color from different Midwest communities, support systems, and political parties demonstrate that even in local politics, the stakes are high.

John Lewis – Get in the Way
Sunday, November 1, 2 p.m.
Follow the journey of civil rights hero, congressman and human rights champion John Lewis. At the Selma March, Lewis came face-to-face with club-wielding troopers and exemplified non-violence. Now 76, he is considered the conscience of Congress.

Independent Lens "Always in Season"
Sunday, November 1, 3 p.m.
In 2014, African American teenager Lennon Lacy was found hanging from a swing set. His mother believes he was lynched. Stark inconsistencies and few answers from officials drive her to lead efforts in what has become an ongoing fight for the truth.

The African Americans: Many Rivers to Cross | Ep. 1 & 2
Sunday, November 8, 2 p.m.
Episode One: The Black Atlantic explores the truly global experiences that created the African-American people. Beginning a full century before the first documented “20-and-odd” slaves who arrived at Jamestown, Virginia, the episode portrays the earliest Africans, both slave and free, who arrived on these shores.

Episode Two: The Age of Slavery illustrates how black lives changed dramatically in the aftermath of the American Revolution. For free black people in places like Philadelphia, these years were a time of tremendous opportunity. But for most African Americans, this era represented a new nadir.

The African Americans: Many Rivers to Cross | Ep. 3 & 4
Sunday, November 15, 2 p.m.
Episode Three: Into the Fire examines the most tumultuous and consequential period in AfricanAmerican history: the Civil War and the end of slavery, and Reconstruction’s thrilling but tragically brief “moment in the sun.”

Episode Four: Making a Way Out of No Way portrays the Jim Crow era, when African Americans struggled to build their own worlds within the harsh, narrow confines of segregation. At the turn of the 20th century, a steady stream of African Americans left the South, fleeing the threat of racial violence, and searching for better opportunities in the North and the West.

Episode Six: After 1968, African Americans set out to build a bright new future on the foundation of the civil rights movement’s victories, but a growing class disparity threatened to split the black community in two.

Miles Davis: American Masters
Sunday, November 29, 2 p.m.
After 1968, African Americans set out to build a bright new future on the foundation of the civil rights movement’s victories, but a growing class disparity threatened to split the black community in two.

Reconstruction: America After the Civil War | Ep. 1
Sunday, December 6, 2 p.m.
Experience the aftermath of the Civil War — a bewildering, exhilarating and terrifying time. African Americans who had played a crucial role in the war now grapple with the terms and implications of Reconstruction and their hard-won freedom.

Reconstruction: America After the Civil War | Ep. 2
Sunday, December 13, 2 p.m.
Discover how post-Civil War America was a new world. For African Americans, support for their social, economic and political gains did not last. The 1876 presidential election deals Reconstruction a blow as the forces of white supremacy ascend.

Maya Angelou: American Masters
Sunday, December 20, 2 p.m.
With unprecedented access, filmmakers Bob Hercules and Rita Coburn Whack trace Dr. Angelou’s incredible journey, shedding light on the untold aspects of her life through never-before-seen footage, rare archival photographs and videos and her own words. From her upbringing in the Depression-era South and her early performing career (1957’s Miss Calypso album and Calypso Heat Wave film, Jean
Genet’s 1961 play The Blacks) to her work with Malcolm X in Ghana and her many writing successes, including her inaugural poem for President Bill Clinton, American Masters – Maya Angelou: And Still I Rise reveals hidden facets of her life during some of America’s most defining moments.

Another View with Barbara Hamm Lee
Thursdays at noon
Another View is a weekly call-in radio talk show that discusses today's topics from an African American perspective. Hosted by Barbara Hamm Lee, the program airs every Thursday at noon on 89.5 WHRVFM.

The R&B Chronicles
Fridays at 7 p.m.
The R&B Chronicles is a weekly musical biography that will focus on classic R&B and soul music and feature many of the great artists and groups.... such as Otis Redding, James Brown, Aretha Franklin, The Temptations, Stevie Wonder, Ray Charles, Earth, Wind and Fire and many more. Hosted by Jae Sinnett.

Sinnett in Session
Monday – Thursdays at 9 p.m. & Sundays at 1 p.m.
Sinnett In Session is a highly intelligent representation of America's indigenous art form--jazz. It's also one of the highest grossing fundraising jazz programs in the country--in fundraising revenue. Host Jae Sinnett presents the best variety in jazz spanning 60 years.