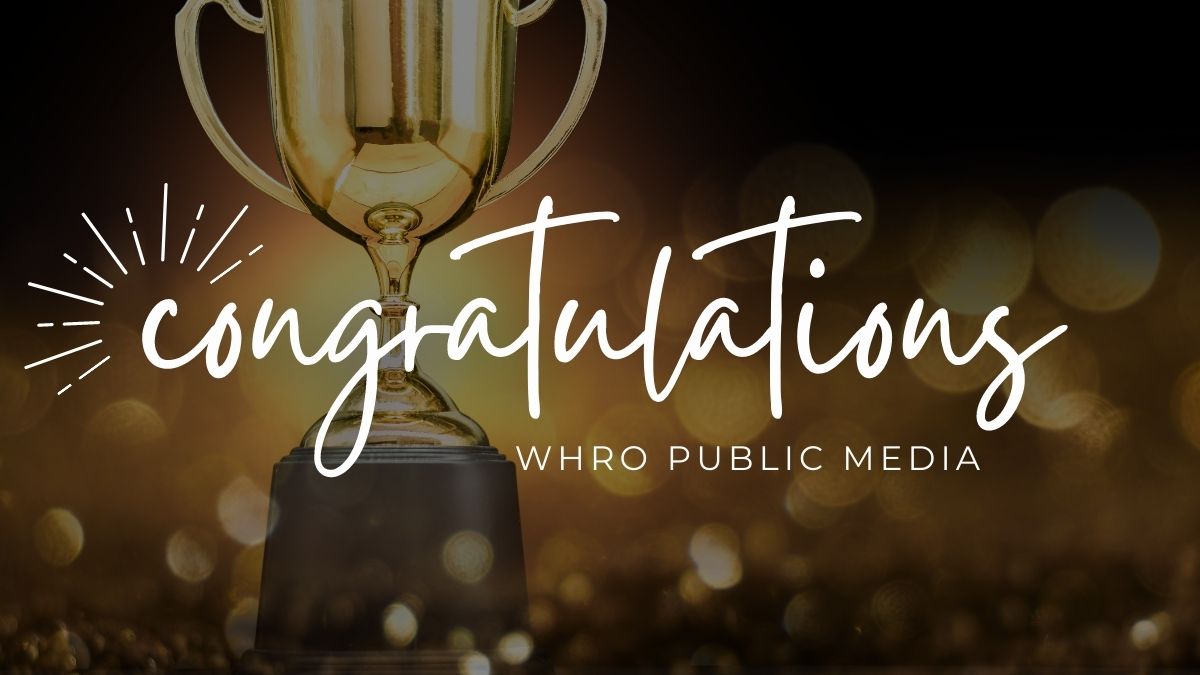 WHRO Public Media has been honored to win several awards recently. From our Work Like A Girl series, to advertising awards for promotions, we are excited to celebrate these achievements.

Luisa Igloria, a professor of English at Old Dominion University, is the 20th Poet Laureate of Virginia.

The Curate 757 series explores the thriving art scene in Hampton Roads. Each week, the program features an area artist. Each person works in a different medium - from painting, to sculpture and photography, to the spoken word. Each episode originally aired as a part of the parent "Curate" series, which also offers profiles of national artists.

Another View "Law Enforcement From the Police Perspective"

2nd place - Use of Sound

It's Coming Quicker Than We Realize:
Reckoning with a future of more flooding

Musician and luthier Freeman Vines makes guitars from found materials that come with a complicated and sometimes tragic history. The hanging tree wood from a tree once used in a lynching has inspired some of his most creative pieces.

For centuries, the roles that African Americans played in shaping the U.S. have been buried. And when it comes to telling the full history of our country, their significance is often dismissed. In historic Williamsburg, Virginia, with the dramatic discovery of the First Baptist Church's foundation and evidence of a burial site, archaeologists are unearthing an untold story.

A weekly Facebook segment featuring stories written by local children. Join us each week online to hear a new story.

At a Crossroads (WHRO Newsroom)

It's not a question of if parts of coastal Virginia will go underwater, but when. How is the region grappling with that reality?

2nd Place, Jordan Christie won for her story The Legacy of Grace Sherwood, the Alleged ‘Witch of Pungo’.

1st Place, Paul Bibeau for his story More Than 400 Law Enforcement Calls Came From a Gloucester Assisted Living Facility. Will It Stay Open?

WHRO Public Media celebrated its 60th anniversary last year. Check out some of the historical facts and photos at whro.org/60.

Produced for The City of Norfolk, this video spot encourages drivers to slow down and stay alert as they share the road to avoid accidents.

In response to a competitive grant from the Virginia Department of Education (VDOE), WHRO created and produced two television shows, Learn and Grow (Grades K-3) and Continue to Know (Grades 4-7), under the Season 2, VA TV Classroom program. WHRO shared the compiled, closed-captioned shows with the other Virginia Public Broadcast Stations (VPM, WBRA, and WETA) and provided the shows on an FTP site for school divisions across the Commonwealth to access and use as desired. These two shows ran for six weeks, September 14, 2020 – October 23, 2020. Additionally, WHRO made the live shows available for streaming on our website and shared the iFrame embed code and a generic promo with the other Virginia Public Broadcast Stations so they could easily post, brand, and promote the shows on their websites. Furthermore, WHRO split each daily show up into four segments, re-closed captioned the shortened videos, and ingested them into eMediaVA and #GoOpenVA.

WHRO is delighted to offer our monthly magazine, Dimensions, which is mailed to 26,000 members each month. In addition to radio and television schedules, Dimensions provides an inside look at WHRO Public Media – the work we're doing in education and outreach, community events and opportunities for members.

This past year, we have focused on our local content for this publication and our members are really loving it. Our feature stories get a lot of fan mail -- people who are relating with the people and the stories. It has also resulted in new unsolicited gifts as a result of the content.

Women without education or training past high school are most often employed in hospitality, child care, and retail. WHRO launched the Work Like A Girl campaign to raise awareness of other careers that women are excelling in. Our goal was to find young vivacious women in these careers to help other young women understand they are great careers for them.

Through our social media Work Like A Girl engagement campaign we were introduced to Pierrette Swan and worked with her to create an exciting video promo. Her passion for her work, her community service, and he energy made her a perfect candidate for a Work Like A Girl promo and help to dispell the stigmas around women in skilled careers. She became our top ambassador and we used her for several additional videos. Feedback from partners has been very positive.