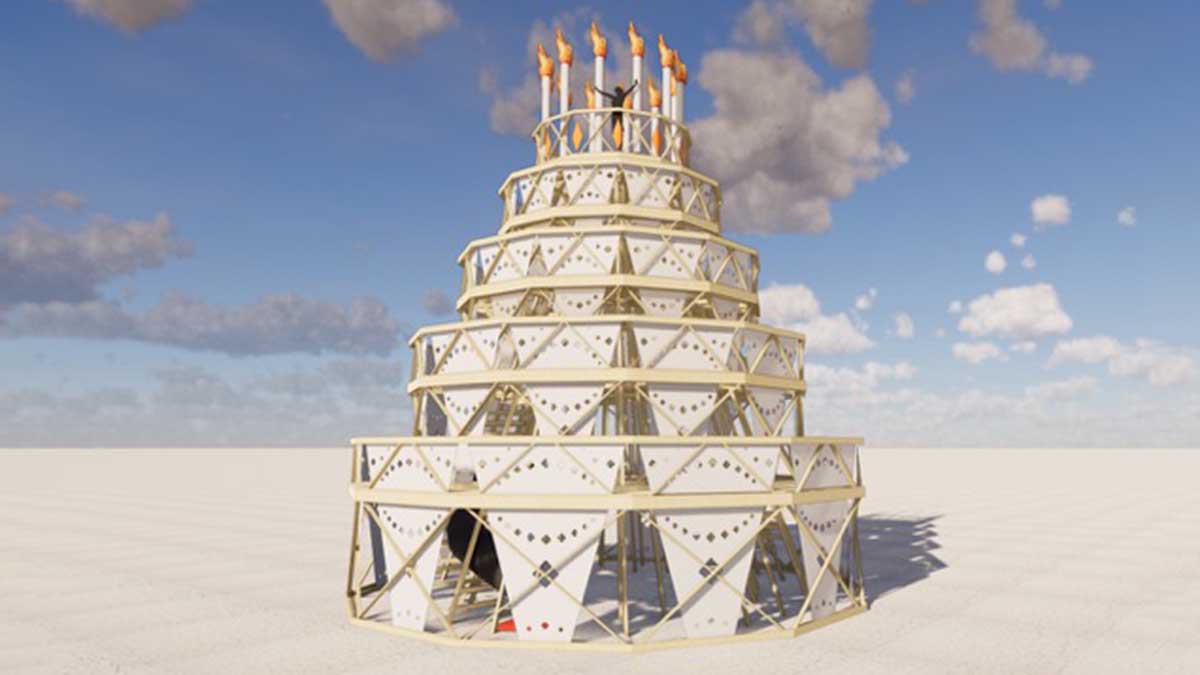 Courtesy of Piece of Cake Productions

Dessert in the Desert

The birthday is the most universal of all of our shared experiences. It is an indisputable truth – no one can deny the miracle of their birth. Conservative? You have a birthday. Liberal? You’ve got one, too. This is true no matter where you fall on the spectrum of gender, race or religion. Whether you guard your birthdate info like a state secret from your coworkers or celebrate with a birthday-month-long treat-yo-self marathon, You. Were. Born. Central to this universal notion is the symbol of the birthday cake – a confection baked with the intent to share among friends and loved ones. Blowing out the candles and making a wish is socially sanctioned sorcery; a magic ritual that persists long after childhood beliefs in tooth fairies and Easter bunnies have been shelved. Truly, the birthday cake is no average dessert. Cake is community, the passing of the slice a way to share the sweetness of our special day. It is the tastiest of all acts of fellowship.

Our community is the birthplace for one of the most unique birthday cakes ever to be concocted. The magic ingredients of this cake were sourced from as far away as Burning Man’s Black Rock City*, and as near to home as our very own Hermitage Museum and Gardens. Last spring, while developing programming for the landmark Art of Burning Man Exhibition at the Hermitage, local burners*, burn enthusiasts and volunteers came together around pillar of energy and Cristina Fletcher; they formed what can only be referred to as a crew. Assembling at the 757 Makerspace, building artwork and planning public events, they realized their shared passion for public art and fire-based shenanigans. Late-night talks with other local burners Klaus Gaba and Sara Barger after the Hermitage opening party sparked the idea to stage a regional burn* near Lake Gaston, Virginia. Architect Thom White of WPA designed a 24-foot-tall, 3-tiered wooden birthday cake as the effigy, and they brought in a DC-based pyrotechnician to make big-badaa-booooom out of the whole enterprise. The burn was a beautiful shared experience for all of the participants, and gave them confidence that they were capable of working together to complete projects far beyond what any of them could accomplish alone. 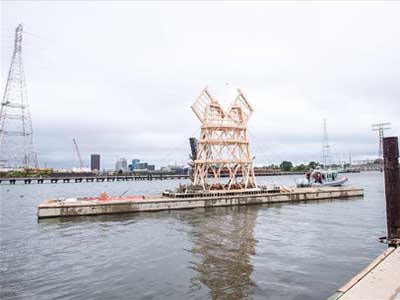 The first “Birthday Burn” freshly under their belt, this crew was the one to turn to when the Hermitage decided it wanted to incorporate an effigy into the Art of Burning Man closing night party. Once again Thom White tackled the design – this time, an articulated mermaid tail to be burned on a barge just offshore. The crew expanded in proportion to the heightened demands and profile of this new project, and the build became a rallying point for these newfound friends. The closing night of the party was a magical moment for this team – seeing their hard work pay off not only for them but for the entirety of the surrounding community was a point of immense pride.

Eager to keep the momentum going, the cake crew, now known as Piece of Cake Productions, began to plot how to make bigger and better art. Veteran Burning Man attendees Thom and Beth White had always wanted to bring art to the desert and had now found the local maker community that could make it happen. After the success of the Mermaid Tail, and inspired by prior Playa* art project The Pyramid of Possibilities by Cristina’s dad Doug Taphouse and his DC crew, they were ready to get baking. Thom submitted plans for MEGA CAKE, a 45-foot-tall wooden cake, with 5 tiers, fire-poofing candles, and a slide that connects upper level to the ground. It is meant to be climbed, explored, danced on, experienced – the ultimate interactive art. Design elements reference the zodiac, rebirth, friendship and gifting – the latter being one of the most beautiful of the 10 principles of burning man. It is intended to be a beacon of joy in the desert – a place to gather and leave gifts for friends to find.

This colossal confection will be built in Norfolk, shipped to Nevada, and burned for a worldwide audience to enjoy. Similar to any cake – it’s not meant to last forever, but to be consumed. Black Rock City is a phenomenon that is shared, and then disappears; just like your birthday, it comes and goes. This cake will mark a moment in time as it honors the passage of time, beautifully ephemeral but leaving lasting memories in all who witness it.

The Tidewater Burners, freshly returned from team-building adventures at regional event The Love Burn in Miami, are ready for the next thing – building MEGA CAKE with the support of Norfolk’s active and engaged arts community. Fundraising is already in progress and will take place through crowdfunding on GoFundMe as well events at venues such as the Chrysler Museum Glass Studio. This project would not be possible without the massive community outpouring of support that coalesced over the period of the Art of Burning Man show at the Hermitage. It would not be happening without the confluence of unique burner personalities – people who say yes. This perfect storm of community and art that began in Norfolk is sending waves to The Smithsonian’s Renwick Museum in DC, where another Art of Burning Man exhibition opens this week. Once again our region has managed to put itself on the forefront of alternative art and culture, and this cake project will be the frosting on all these efforts to bring art into our collective lives.

MEGA CAKE will need volunteers, money, supporters, and energy. Deadlines and stumbling blocks will happen with any project of this scale, but with the combined community of the seven cities backing this effort, success is sure to follow- and the taste of success is the sweetest of them all.

To get a slice of the cake, visit www.gofundme.com/megacake.

Not familiar with all these Burning Man Terms? One of the 10 Principles (more on that below!) is Inclusion, and we wouldn’t want you to feel left out – so we’ve provided a glossary! Enjoy, loves.

Black Rock City – Located in the Black Rock Desert, it becomes the 4th largest city in Nevada during the week of the Burning Man Festival each year.

Burner – Someone who lives by the 10 principles of Burning Man, whether or not they’ve ever been able to make it to a burn.

Regional Burn – A conclave of participatory art and temporary urbanism that carries the spirit of Burning Man throughout the year, all over the globe.

Playa – The surface of the ancient lake bed on which Burning Man takes place. The source of the Dust.