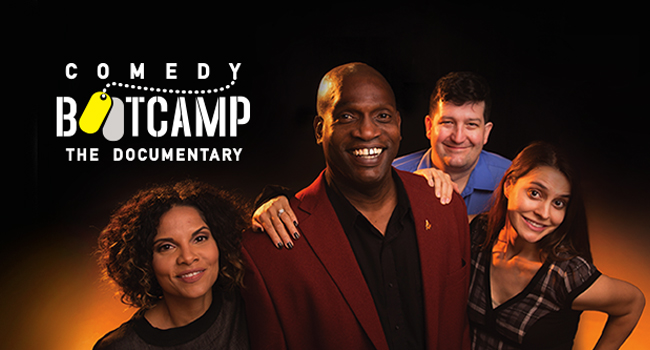 How does one go from having no stand-up comedy experience to performing stand-up routines at local venues—and even the White House—in just a matter of months? For a group of local veterans it was by attending an eight-week Comedy Bootcamp to hone their talents. A new WHRO original documentary chronicles their journey.

Comedy Bootcamp: The Documentary follows the class of veterans as they learn to use humor as a way to share their experiences and connect with others. Participants learned from professional comedians through a series of classes provided by the Armed Services Arts Partnership, an organization that offers free arts classes to service members, veterans and their families. On their way to learning to become stand-up comics, some of the vets discovered a new outlet to discuss the struggles they have faced in their transition to civilian life.

For Mike Lake, a third-generation military veteran, making people laugh is a way to cope with the chronic pain he suffers from a degenerative arthritic condition. After the condition forced him to retire from 16 years of service in the Coast Guard, he dealt with depression until he began to find new interests.

“For a long time I focused on what the condition and my physical state prevented me from doing,” Lake explained. “Now I’m just trying to focus on what I can do and do as much as I can.”

He learned about Comedy Bootcamp after becoming involved in the Wounded Warrior Project, and he found the comradery among his new classmates to be very uplifting. “Telling jokes and making people laugh helps me feel better myself,” he said. William Breckenridge, a retired Army veteran, also derives enjoyment from making people laugh. His former Army commanders encouraged him to apply for the program citing his innate humor and gregarious nature.

As a local karaoke DJ, the spotlight is nothing new to Breckenridge. Both comedy and music are outlets that temporarily take his mind off his post-traumatic stress disorder (PTSD).

“When it’s my turn to go up there and do my stand-up, it’s like I’m taking off a uniform,” he explained. “When I grab that microphone I’m somebody totally different. Then I go back to my seat and put that back on—my PTSD uniform.”

The course culminated with a graduation show where veterans performed for friends, family and the public at a local comedy club. A few of the comics were also chosen to perform at the White House.

The production was an ambitious undertaking for the WHRO production team. Using the largest crew they have ever had out in the field, the team shot more than 300 hours of footage at locations all over Hampton Roads. For Kenny Hopkins, WHRO promotions producer, the project was an opportunity to become better acquainted with the
men and women who serve in our military.

“I better understand what veterans are going through when they come home,” he explained. “We owe them a lot. They are sacrificing the best years of their lives to protect their country. They should be able to come back and enjoy life. That’s part of our duty as civilians to welcome them back.”

The project was made by possible through a grant from David & Susan Goode that enables WHRO to broadcast various performing arts initiatives in Hampton Roads. Comedy Bootcamp: The Documentary airs Monday, November 13, at 9:00 p.m. on WHRO TV15. Learn more and view the trailer at comedybootcampdoc.org.