As we all enjoy more of our favorite programs via mobile and on-demand, WHRO has created a one-stop-destination for all your Public TV and radio content, our free WHRO media app.

For WHRV and WHRO FM listeners, the app offers access to our live radio streams and locally-produced radio shows. It offers the latest NPR News articles and audio segments, lets you pause and rewind live audio, and view the program schedule.

For WHRO TV viewers, the app gives access to a large selection of the PBS programs you love, including hundreds of hours of WHRO Passport exclusive on-demand programming, such as Masterpiece, NOVA, and Antiques Roadshow, as well as all locally-produced programs like Curate and The Historic Attucks Theatre: Apollo of the South. It’s also your destination for up-to-date TV Schedules and Live 24/7 WHRO Kids TV stream. 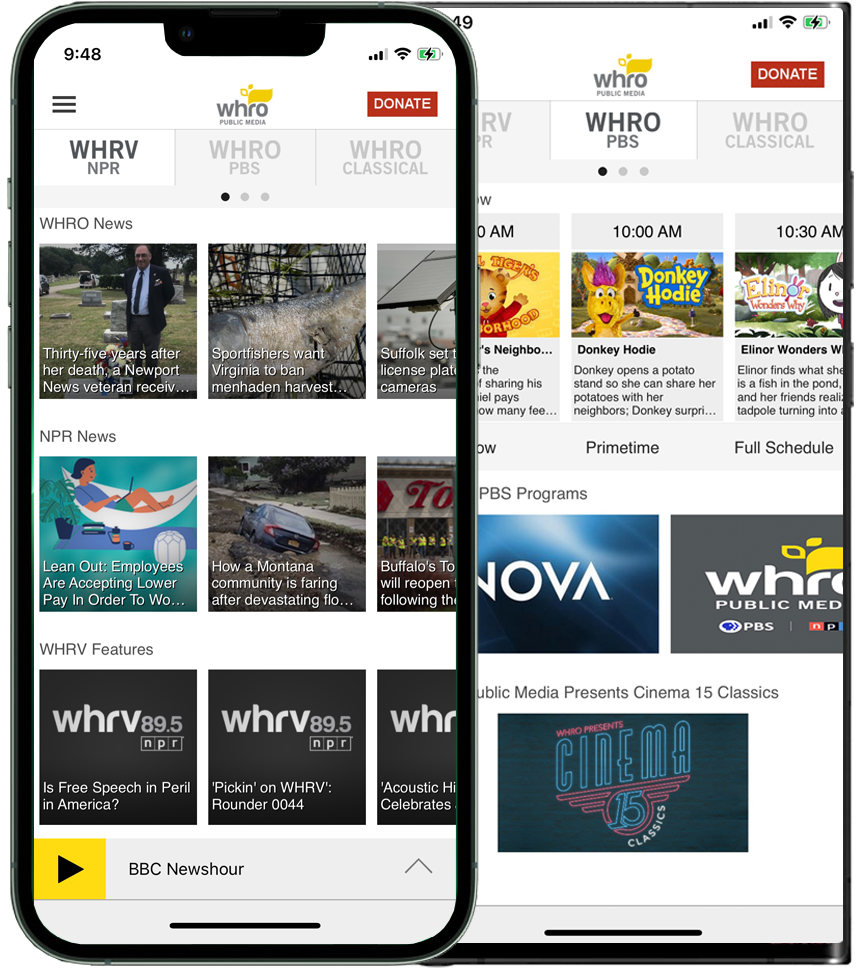 Listening to WHRV and WHRO FM on your Smart Speaker

Your smart speaker just got smarter. With a few simple commands, you can access the entire world of WHRV and WHRO FM – all the latest news, live and on-demand shows and podcasts.

Enable the WHRV FM Skill. Then, say any of the utterances below:

Enable the WHRO FM Skill. Then, say any of the utterances below:

All programs aired on The WHRO Voice are specifically designed for and primarily directed to blind, visually impaired or other handicapped persons who are unable to read standard printed material.

Enable the WHRO Voice Skill. Then, say any of the utterances below: 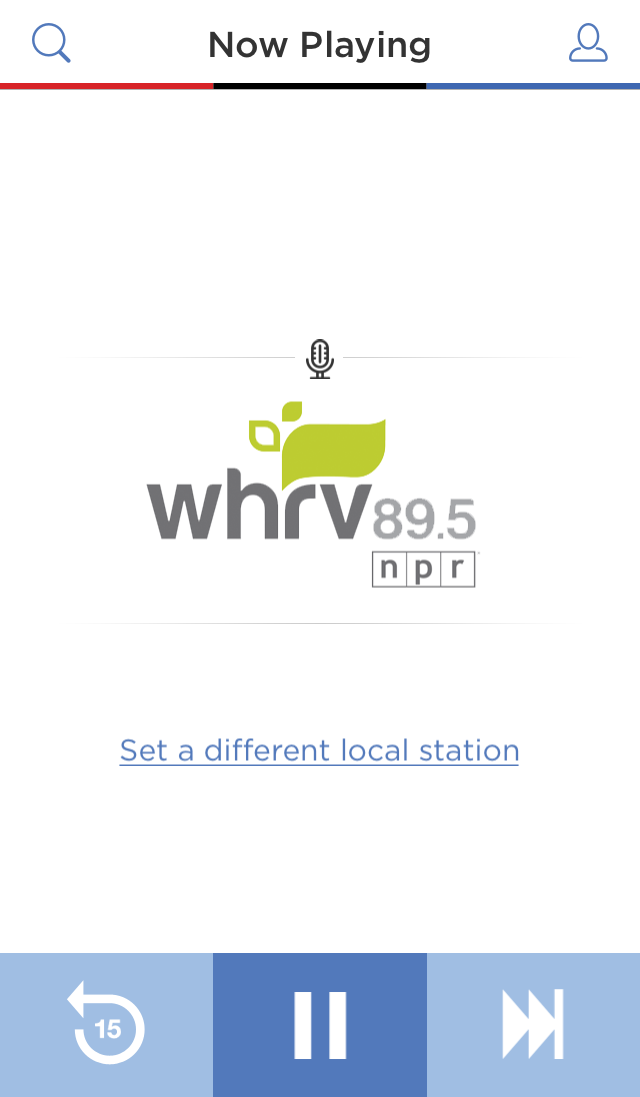 NPR One is the new audio app that connects you to a stream of public radio news and stories curated for you. Great storytelling and rigorous reporting that informs, engages, inspires and surprises—from the ends of the earth to your own city or town—available to you whenever, wherever. It’s public radio made personal.

Even with the breadth of public radio at your fingertips, you won’t lose touch at home. Local news is woven seamlessly into your listening experience. Local stories, locally reported, are delivered daily. Community is everything.

NPR One on Amazon Smart Speakers

NPR One is available on your Amazon Smart Speaker. Just say "Alexa, enable NPR One" and she'll send a card to your Alexa app to help you get started. From there, follow the prompts to launch into your customized listening experience.

Below are all of the NPR One-enabled commands currently available on your Amazon Echo:

Church Street: Harlem of the South
Church Street gained the reputation as the "Harlem of the South" because it was the center for live entertainment in the South. Live performances, movie houses and street music reigned supreme for Norfolk residents and outlying communities. The likes of Duke Ellington and Louis Armstrong helped garner a national reputation for Church Street, along with the Attucks Theater and the Plaza Hotel.

Civil War in Hampton Roads
An in-depth look at the events in Hampton Roads during the War Between the States, this series details the pivotal moments, figures, and locations of the conflict within the region. John V. Quarstein, Director of the Virginia War Museum, hosts.

Code-Switching
Everyone at some point in their lives has code-switched. You may not be all that familiar with the term, but if you’ve every transitioned from an informal speech pattern to a more formal type of speech, you’ve code-switched. The “Code-Switching” documentary looks at how the inability to code-switch can impact where you work and what you earn. The documentary does not point the finger at a particular dialect as incorrect or wrong. Nor does it imply that only Mainstream or Standard English should be spoken at all times – but it does address the pitfalls of only being able to speak informally in a society that expects formal speech in certain environments.

Comedy Bootcamp
Follow the newest class of veteran comedians as they learn to use humor as a way to share their journeys and connect their stories to others. Through the Comedy Bootcamp program, participants attended classes led by professional stand-up comedians. With a concluding White House performance, the participants share their stories of resilience, hope and humor.

Curate
The Curate series features the work of Hampton Roads' visual artists, musicians and performance art projects, along with artists from across America. Each episode centers on a unique theme and profiles artists who work in a variety of mediums from painting to sculpture and photography to the spoken word.

Glass on Fire
The Chrysler Museum Glass Studio is one of the premier glass studios in the United States. Not only is glass art created here, but the museum also houses a world-renowned collection.

Gone But Not Forgotten
Captures Hampton Roads in the 1940s and '50s using vintage film and photographs, accompanied by interviews with Hampton Roads residents. Bonus feature: "It happened in Norfolk" is a black and white film made in 1936 by Irving Yates with Maury High School students. An interview with Rolf Williams Sr., a Norfolk native who appears in the film, precedes the reel.

Hampton Roads Veterans Coming Home
To ensure local veterans have the specialized support they need, WHRO is collaborating with local organizations to coordinate and publicize programs to help veterans access valuable information and comprehensive services. Additionally, through this initiative, WHRO is documenting stories about local veterans and their struggles.

The Historic Attucks Theatre: Apollo of the South
One of Hampton Roads' greatest treasures, the Attucks Theatre, turns 100 years old. Musicians of the greatest caliber have performed at the Attucks, legends like Duke Ellington, Cab Calloway, Ella Fitzgerald and Nat King Cole just to name a few. The 600 seat venue was an instant source of pride to Norfolk's Black Community. It was added to the National Register of Historic Places in 1982.

Home Room One
On October 2, 1961, WHRO-TV broadcast its first “tele-lesson” in Hampton Roads. For more than 50 years now, WHRO Public Media has delivered educational services through its television and radio programming and online media. WHRO President & CEO, Bert Schmidt, presents a broad overview of the organization’s offerings in these education services, development, and programming.

Music & Might – An International Military Spectacular
WHRO and the Virginia Arts Festival have teamed up to bring you the 2015 Virginia International Tattoo. This special features over 1,000 performers from 8 nations sharing their unique culture and pride. Highlights include performers from the U.S. Army, Navy, Air Force, Marine Corps, and Coast Guard and a total of 1,000 cast members from 8 nations. The program features Inspirational patriotic music, majestic massed pipes and drums, show stopping drill team maneuvers and colorful and elegant dancers all accompanied by insightful narration and commentary from the international cast.

The Norfolk 17
They were just teenagers who wanted a chance at a better education. But in 1959 Norfolk, that was a problem. African-American students werent allowed to go to historically white schools.

#Young Singers Project
Follow the Virginia Chorale's flagship program and meet local high school students as they embark on a two month journey to prepare for their performance of #twitterlieder: 15 tweets in 3 acts. Composed by James Eaken III and written by Anthony Silvestri, #twitterlieder chronicles life from the perspective of the digital landscape by crafting tune from tweets.

You can also listen on our app or your smart speaker.

An important message to our viewers